A nostalgic 1946 print by Stanley Anderson depicting a Blacksmith shoeing a horse came up for auction at Minster Auctions on 7th July 2021 selling for £420. Stanley Anderson RA (1884-1966) was an important figure in the revival of line engraving in the 1920’s and 1930’s. Today he is best known for his traditional images of  Farmworkers and rural craftsman. The artist often knew his subjects personally and saw them as equals. The print was subtitled with a line from the book of Ecclesiasticus titled ‘The Smith also – All these trust to their hands, and everyone is wise in his work’. 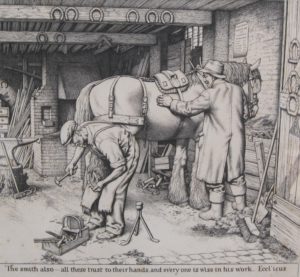